38 years old, Shaheena lives in Jaga Taka village, which is 20 kilometers from the health facility and  51 kms from Tehsil Head Quarter (THQ) hospital Mirali. A village deprived of even the most necessities, with only a few shops selling basic food products and no medical facility because of the military operation Zarb-e-Azb, where they spent three years in the Bakakhel IDPs camp and various rented houses. That was the most difficult time of their lives because Shaheena is her husband’s second wife. They were homeless at the time, and had to live in a basic shelter. They returned to native area after things turned normal. Even after they return, Syed Wali Shah’s financial condition is fragile, as he works as a driver and relies on leased vehicles to meet the needs of his large family.

Concern worldwide with support of USAID / BHA, and with partner Prime Foundation implemented the MARSP program for crises affected populations of North and South Waziristan tribal districts of Khyber Pakhtunkhwa Pakistan. The major stakeholders are health department, district administration, and other key stakeholders.

24,275 beneficiaries were reached through CHWs and LHVs who disseminated key health messages at the health facilities as well as in the communities via door-to-door household visits.

Shaheena, 38 years old, went to the health facility for a check-up on October 12, 2020. Her preliminary examination was conducted by Concern partner Medical Officer Dr. Zia Ullah. She was weak, pale, anemic, nervous, and had a low blood pressure. Dr. Zia referred her to Naila, PF LHV for a thorough examination and evaluation, which included diagnostic tests (HB, Blood Group, HBS, and HCV). Shaheena was 41 weeks pregnant (posted) and her cervix was only opening two fingers. She was diagnosed with a postterm pregnancy after a string of related pregnancies in which the fetus did not live.

Shaheena was recommended to return home after the team agreed to wait a day for the onset of natural labor pain rather than opting for induced labor right away. Shaheena was transported to the facility by PF emergency services on October 13, 2020. Naila assessed her situation, but there was no change in the opening of her cervix, and no labor pain. Shaheena was transferred to the labor room and given the necessary drugs to induce labor and open the cervix.

The labor pains began gradually, and Shaheena was able to deliver the baby within a few hours. Naila noticed the umbilical cord was wrapped around the baby’s neck during the birth, so she took extra precautions and treated the situation professionally. The baby was successfully delivered, followed by the removal of the placenta and the administration of the required drugs to the mother. The umbilical cord was tied off securely with sterile tape about 4 inches from the baby after it stopped pulsing, then tied off again 2 to 4 inches from the first string. Between the two bonds, the cord was cut. The baby was put on the mother’s stomach, wrapped in a warm blanket.

Following the delivery, Shaheena was held under observation for further monitoring. She was completely healthy in half an hour and was able to breastfeed her child. She was given advice on the benefits of colostrum and exclusive breastfeeding. The Medical Officer recommended her free medications for home treatment and urged her to return to the facility within three days for postpartum care until the team was fully pleased with the patient’s condition. Syed Wali Shah took his wife and newborn to the hospital for a postnatal checkup on October 15, 2020. Dr. Zia and Naila examined the mother and the newborn to ensure that they were all well and that there were no post-delivery complications. 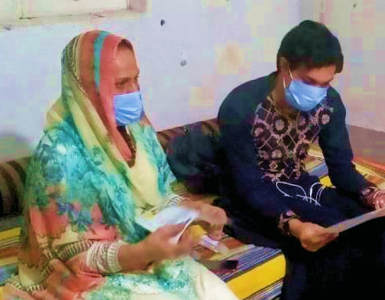 The margin in the Middle of the City – International Rescue Committee

The IRC team reached out to Naina & another transgender activist from her community requested their help to raise awareness regarding COVID-19, including symptoms & infection prevention... 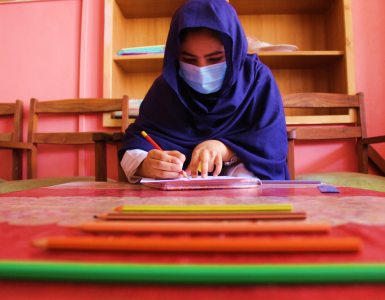 Fazila is studying in one of the schools supported under PRM supported Program for Retention, Enrollment, & Protection (PREP-II) in Schools for Afghan Refugees implemented by Mercy Corps... 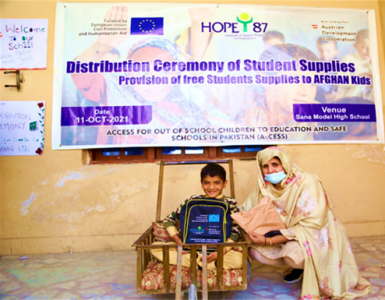 HOPE’87 is supporting 1200 out of school Afghan children through its project 'Access for out-of-school Children to Education' & became a beacon of hope for Usman too by providing him a wheelchair to go to school...