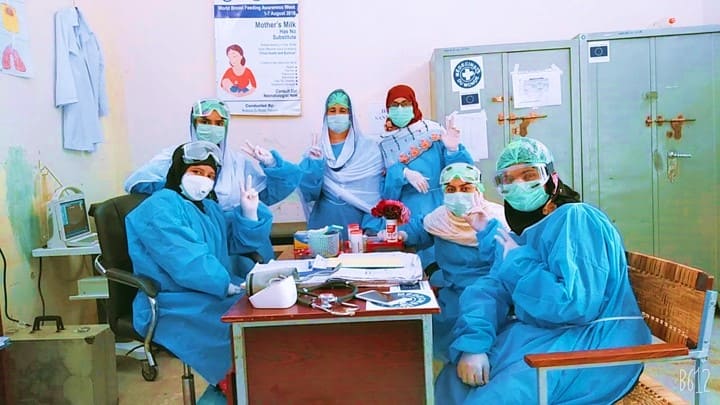 A 32-year-old Fouzia was brought to the 24/7 Basic Emergency Obstetric and Neonatal Care (BEmONC) center of Rural Health Center Gomal in Tank district in active labor. The BEmONC center is supported by Medecins du Monde (MdM) with the financial assistance of German Federal Foreign Affairs.  Fouzia appeared to be in severe labor pain, and her high blood pressure made things more challenging. She came from a small village Kot Azeem in Tank District, located one hour from the health facility. She shared her previous experience of two miscarriages, both of which happened in her second trimester. But it was for the first time in her life, she came to the health facility for ante-natal consultation and delivery.

MdM clinical team received Fauzia and realized that she was expecting twin babies. Such a case is usually referred to be handled in a Comprehensive Emergency Obstetric and New- born Care (CEmONC) set-up, considering the potential complications. However, there was no time for a referral as she was brought to the clinic at the last minute.

The team informed the attendants of the patient about the situation and potential complications. The trained professional team of MdM, was able to handle the situation skillfully, and both babies were delivered safely within 20 minutes.

The family expressed gratitude for the services provided by MdM with dignity, respect, and care.

The medical team continued to observe the condition of the mother for another two hours before she became stable and later was discharged from the clinic. The next day, the team followed-up and learned that both babies and their mother were in good health and stable.