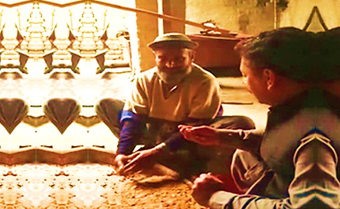 Aftab Gul s/o Anar Gul is a permanent resident of Village Gul Mula Kalay, UC Ghala Dher, Tehsil and District Mardan. He is a daily wager and belongs to a poor farmer family consisting of 7 members including his mother, wife, three daughters and two sons. They live in a small mud house which is almost 10 km away from the main Mardan city. He is the only bread earner in his family and is currently working in a small outlet of sugarcane crushing plant on daily wages.

During the identification process, he was identified by IDEA staff as a prospective case eligible for assistance for agricultural inputs for a small land holder farmer.  He told the IDEA staff that the land that he is looking after is on half payment called Nema in local language.

He sows and takes care of the seed only. Due to poverty and many mouths to fill, he did not have enough resources to purchase quality seeds for sowing in the upcoming wheat season. He was facilitated by Welthungerhilfe with agriculture inputs comprising of wheat seeds 50 KG, 50 DAP and 100 KG Urea.

After one and half month of the distribution, the WHH Project Manager visited Village Gul Mula Kalay and met Aftab Gul who was working in a Gurr making outlet. He was very happy and grateful for receiving the agriculture inputs that he had already sowed. The WHH’s agriculture assistant has really improved his financial situation, and after which can now provide necessities to his family.

He further said that the aid provided by WHH and IDEA has helped many poor people in the area who were badly affected by the COVID-19 pandemic related lockdowns.