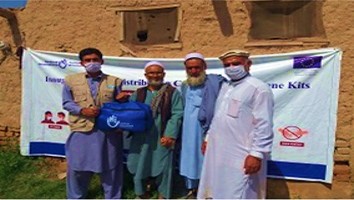 A huge influx of Afghan population crossed the borders and arrived in Pakistan since in 1979 as a result of Soviet invasion and later sectarian fighting in Afghanistan. Afghan refugees settled throughout country due to which Afghan refugee camps were established in KPK, Balochistan and Punjab. Commissionerate for Afghan Refugees (CAR) was established to facilitate the Afghan Refugees who were crossing the borders and coming into Pakistan. It registered the refugees and rendered them eligible for United Nations assistance. The CAR also coordinates in relief work carried out by various national and international aid agencies involved in different projects.

Kababyan camp is one of the camps in Peshawar in KP province situated nearby Warsak Road and has a population of about 10,755 people. Keeping in view the diverse needs of the camp population, Handicap International implemented ECHO funded project ‘’Provision of Integrated and Inclusive Health Assistance to Afghan Refugees and Host Communities’’ in six districts of KP and in 11 Afghan refugee camps including Kababyan Camp. WASH is an integral component of the project in targeted communities.

Under the project, masks, sanitizers, health, and hygiene kits were distributed in the camps and awareness sessions on health and hygiene were conducted.

This included teaching hand washing techniques and the use of soaps, especially after using toilet and before eating food. Moreover, the communities were given awareness on Covid-19 prevention and SoPs and reducing risk from water-borne diseases. Health and Hygiene Kits were also distributed in the camps. Project activities resulted in improved behaviour change in the camp population.

WASH committee was re-activated and upon the request of the people for installation of hand pump in the BHU Camp area, water samples were collected from the camp for water testing. The results indicated contamination of water, not fit for drinking purposes. A hand pump was installed that provided safe and clean drinking water that benefitted 520 people of BHU Camp.