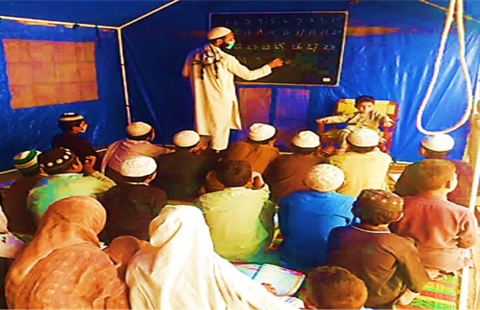 Being only 3In Pakistan, most of tribal areas do not have access to safe and quality education. Literacy rate of the newly merged districts (ex-FATA) of Khyber Pakhtunkhwa province is quite poor, 3% out of which only 13% of them are girls. Gardi Bagh is a remote village of the  newly merged District Bajaur and is adjacent to PaK-Afghan border. There are 58 households in this village. Due to non-availability of schools in the village, approximately 78 children were unable to get proper education. The nearest schools to the village are the Government Primary Schools, Gardi Bagh, which are almost 2 km away from the village. Due to long distances to educational institutes, and security threats, access to the institutions becomes challenging, especially for girls, who are not allowed to travel unaccompanied.

The people of Gardi Bagh understand the importance of education and wanted to equip their daughters with safe quality education close to their homes. In this regard, the villagers wrote an application to the Assistant Director of the National Commission for Human Development (NCHD), Bajaur, for the establishment of a school in their village. NCHD is a federal government statutory organization that has been working in Pakistan under education in emergency (EiE) field for the provision of quality education.

Establishment of Feeder School in Bajaur

After receiving application from villagers, AD followed INEE’s analysis standard 1 and visited Gardi Bagh for the verification. INEE’s community participation standard 1 and 2 were used to involve community members for establishment of the school. Volunteer teachers were selected as per the INEE’s teachers and other education personnel standard 1. HOPE’87 and NCHD jointly organized enrollment campaign events at district, tehsil and household level in September 2019 to achieve 100% enrolment. After the successful enrolment campaign, Feeder School (FS) Gardi Bagh was established in October, 2019.

The FS Gardibagh is now helping both boys and girls to get quality education. Currently, 46 boys and 55 girls are enrolled in FS Gardi Bagh with two Feeder Teachers.