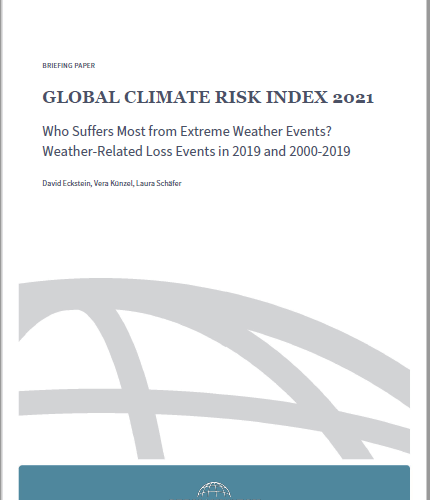 The Global Climate Risk Index 2021 analyses and ranks to what extent countries and regions have been affected by impacts of climate related extreme weather events (storms, floods, heatwaves etc.). The most recent data available for 2019 and from 2000 to 2019 was taken into account.

The countries most affected in 2019 were Mozambique, Zimbabwe as well as the Bahamas. For the period from 2000 to 2019 Puerto Rico, Myanmar and Haiti rank highest.

This year’s 16th edition of the Climate Risk Index clearly shows: Signs of escalating climate change can no longer be ignored – on any continent or in any region. Impacts from extreme-weather events hit the poorest countries hardest as these are particularly vulnerable to the damaging effects of a hazard, have a lower coping capacity and may need more time to rebuild and recover. The Global Climate Risk Index indicates a level of exposure and vulnerability to extreme weather events, which countries should understand as warnings in order to be prepared for more frequent and/or more severe events in the future. The storms in Japan show: Also high-income countries are feeling climate impacts more clearly than ever before. Effective climate change mitigation and adaptation to prevent or minimize potential damage is therefore in the self-interest of all countries worldwide.