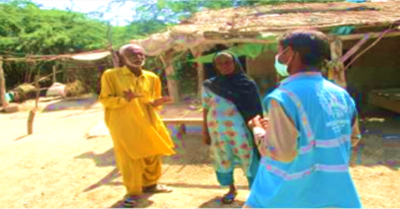 Emergency Response for the most Vulnerable in Balochistan

Emergency was imposed in seven districts of Balochistan after a spell of heavy rain and snowfall across the province in January 2020. All transportation routes were blocked due to heavy snowfall leading to a severe crisis and shortage of food in the region . The spell of snowfall and rain left hunger, cold and disease in its aftermath.  Due to rough & tough hilly tracks which made it inaccessible to reach the village. Majority of the population is daily wages labour and their livelihood is quite unstable.

Gudda, is the Village of UC Ziarat, District Ziarat, which was one of the villages that were severely affected by the disaster. Majority of the population are daily wage laborers, deprived from basic facilities of life, voiceless and neglected due to extreme poverty and  illiteracy. The village has a total of 45 Households and a population of 315 people living in miserable conditions. The rough hilly terrain rendered the area inaccessible.  Muslim hands and ECHO provided the population with much needed humanitarian assistance through their emergency response interventions.

Muslim Hand was the first and only organization who came forward for first emergency response in February 2020. At the time of crises Muslim Hands provided winterized kits to affected families and extended further help through another ECHO Funded Project “Emergency Response of the flood/snowfall affectees at Dist. Ziarat, Balochistan.

Meanwhile the pandemic of COVID -19 occurred which adversely affected the traumatized community and compelled them to limit their movement and consequently restrict their earning sources due to lockdown. The newly emerged situation further pushed them towards extreme vulnerability. Most of the population was facing severe food crises due to one disaster after another.

In village Gudda, 23 Households were finalized for intervention. These identified families were supported in term of Cash for work- 22000 per family- which helped them in repairing their damaged houses. Cash support for food was provided -5000 to each family- which enabled them in acquiring immediate food items for their families. One Shelter Tool Kit was given to each targeted household which was a significant addition to their household inventory.

At the time of first visit it was observed that no family had its own toilet and open defecation practice was the norm. Further, there were no sense of personal and domestic hygiene. Water scarcity was a major issue of the village. Habitants of the village fetched water for domestic use from a great distance, usually around 2 kilometres, on a slippery and dangerous terrain. Fetching water was the responsibility of women and children as majority of the male members work outside the village as daily wagers.

Muslim hands addressed this immediate need by installation of submersible motor through solarized energy source, laid pipes and constructed a water tank for water storage along with water collection points and washing pad.

Due to these interventions, the village community has easy access to water for domestic use, this clean drinking water facility is benefiting 45 households and average population of 315 Individuals. Furthermore, 23 toilets were constructed. MHI provided toilet supplies and technical support for construction, whereas all construction cost was managed by households themselves through volunteer work.

Hygiene sessions were conducted for females. 23 females attended the sessions, which resulted in personal and domestic hygiene improvement in the village. COVID 10 awareness was the part of these sessions which were conducted in local language. This was the first time that females of village Gudda received awareness and information about COVID -19 precautionary measures.

Impact of the intervention

•At the time of intense crises post snowfall and during COVID-19,  the community got the opportunity to work at home for repairing purpose, hence sustaining their livelihood.

We were suffering from several kinds of crisis. We didn’t have toilets for defecation. Open defecation was common, especially in females who had to wait for sunset for open defecation. The village has always suffered due to unavailability of water. During snowfall season it is hard to travel in the hilly area to fetch water. The villagers had no warm cloths in extremely cold weather. My family has suffered from hunger as we had limited food available. We tried to utilize our resources carefully, as these were the only source of our survival.