Village Sarah is one of the rural, remote areas of Tharparkar, in Sindh province, where annual drought and famine spells force thousands of families to migrate in search of food & water for their families and livestock. The wells get drier and women carrying infants walk bare footed for miles on sand dunes in scorching heat of more than 50 degrees Celsius in search of water. It is a full day exercise for a few liters of water-that too insufficient to last for a whole day!  Lack of water leads to poor sanitation and contamination subsequently causing transmission of diseases like cholera, dysentery, typhoid etc. Insufficient or inadequately managed water and sanitation facilities and services expose individuals to a host of health risks which in many cases are preventable.

Children and young people are often the most severely affected by inadequate sanitation and open defecation practices. By virtue of their developing immune systems, they are affected by a number of illnesses and conditions ranging from physical and mental stunting to cholera  and malnutrition. When considered at the scale of drought- hit Tharparkar, this means thousands of children in the district suffer from the various physiological complications that arise from open defecation and inadequate access to sanitation facilities.

Same, is the story of Ghulam Haider, a resident of Sarah Village in Tharparkar who lives in a thatched  hut with his wife and four children. He narrates his story “our community had no concept of toilet/latrine, we all (men, women & children), practiced open defecation; defecating in open fields or bushes. Our girls and women had to travel to far off distances to search for an abandoned place, or bushes to defecate, as a result of which they had to wake-up in dark early in the morning or wait till the sun sets to meet their needs”.

Further, the villagers had no information on handwashing with soap as normally they used only water or ash to wash their hands and majority never washed their hands before cooking, having a meal or feeding children. Villagers never considered personal or domestic hygiene important for their health and lives, the food remained uncovered and their water containers were never cleaned. Resultantly children, young boys and girls suffered from diarrhoea and cholera most often.

For girls and young women, lack of access to private latrines and toilets also rendered them vulnerable to violence, number of snake biting incidents and depriving them of a healthy and productive life. This is not only a major public health concern but a vital human rights issue as well.

“We practiced traditional ways of feeding soup or water to a diarrhoeal patient, as the nearest health facility is more than 50 miles away from this village. We have lost a number of children and young boys and girls fighting against cholera, diarrhoea and malnutrition and always considered it as a matter of fate, and divine will  that we could not resist or fight but now we realized, we ourselves were responsible for all those losses and we could have saved many lives if we were aware earlier”, Lalan (Ghulam’s Wife) narrated with broken voice.

“We have been living in darkness and have paid the price in terms of our health and lives. Our, lack of awareness and unhealthy hygienic practices caused us to suffer, but now we have learnt.

Every household has its own private toilet, our children always practice handwashing with soap. We feel safer and protected; we have learned the true essence of cleanliness” Ghulam Haider further explained.

Every household has its own private toilet, our children always practice handwashing with soap. We feel safer and protected; we have learned the true essence of cleanliness” Ghulam Haider further explained.

Human Appeal has trained local villagers as masons on construction and rehabilitation of latrines and trained selected young girls and boys as community resource persons on health & hygiene awareness.

The selected local group is a great resource pool to make communities self-reliant and self-sustained.   They not only share the same language and culture, but their community members also feel comfortable consulting with them when needed.

Our Post-KAP (Knowledge, Attitude and Practices) survey further analysed project results and indicated that 100% of the households had now access to toilets as compared to just 3% before the project.

More than 90% households had improved behavior change towards handwashing with soap and around 96% reported covering their drinking water and eatables appropriately. Based on memory recall of last one month, the incidence of diarrhoeal cases was reduced by 21% after the project. Further, 100% of the households are aware and practiced feeding ORS to diarrhoeal patients.

With this initiative, Human Appeal has achieved the aim of empowering rural communities through improved sanitation & hygiene practices in one of the targeted villages. The programme was acknowledged by the local government which awarded the village  with an “Open Defecation Free (ODF) Village Certificate”. 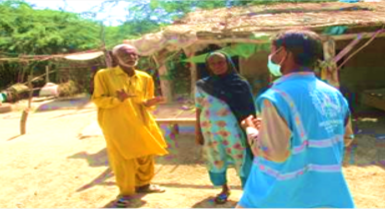 Emergency Response for the most Vulnerable in Balochistan

Submitted by: Muslim Hands — Emergency was imposed in seven districts of Balochistan after a spell of heavy rain and snowfall across the province in January 2020... 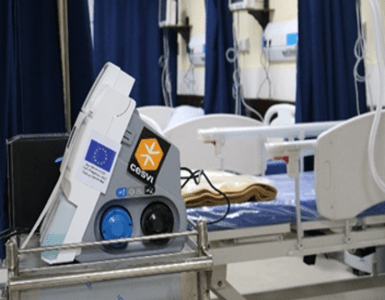 Submitted by: Cesvi — Cesvi strengthened the hospital in September 2020. Since then, none of the COVID cases have been referred to Peshawar...

Construction of a Water Pond to Improve Access to Water

Submitted by: Qatar Charity — Statistics reveal that approximately 53,000 children die every year with water-borne diseases, resulting in a very high stunting rate of 44%...